Skip to content
Like most people, fireworks amaze me like a moth drawn to flame. It's even better when you set fireworks to music. Think sychronized swimming. Now it's just not all about bright explosions, but about art, choreography, colors and timing.
The Philippine International Pyromusical Competition is now running on its 5th year, and though I am a sucker for fireworks, this year was my first time to witness sparks fly everywhere.
Coming in early had its perks. I got to choose the best spot in the area and of course, aside from an unobstructed view of the main spectacle from Spain and United Kingdom, I had the chance to see the famous Manila Bay sunset. Because really, aside from seeing it while you're passing by Roxas Boulevard, when was the last time you purposely stopped to bask in the fiery beauty?
Early birds like me were greeted by bongo bands, mascots, and men walking on stilts. Food stalls were scattered around the area and their crew were going around the place to get orders from people like me who were hungry but couldn't manage to leave their spot.
There were also several performances by dance groups throughout the night and half of The Zombettes, Sanya Smith, also played sets in between the performances.
Festivities went a notch higher when the announcer boomed over the speakers, officially starting the ceremony by playing our national anthem. The criteria were announced and the board of judges were introduced. A few minutes later, lights were dimmed for Brunchu Pyro of Spain. The theme for their entry was "Jump" - their way of telling Filipinos that we can jump over the hurdles of Yolanda. Next entry was from Jubilee Fireworks from United Kingdom. Their entry started subtle with low fireworks in tune to the first slow beats and eventually breaking out into big, colorful explosions. I had a hard time fitting the sparks into the frame. UK also showcased different shapes to tickle your fancy, like hearts and palm trees and chili peppers like the photo below. It's either that or my imagination was all over the place! It's no surprise that UK is the defending champion in the competition and a two-time winner (2010 and 2013). Former champions China and Canada are scheduled in the next few weeks and the competition would be tighter. But do we really care which country will take the trophy? The audience in awe is the true winner.
** The competition will run for 4 more Saturdays until March 22 at SM Mall of Asia (By the Bay). 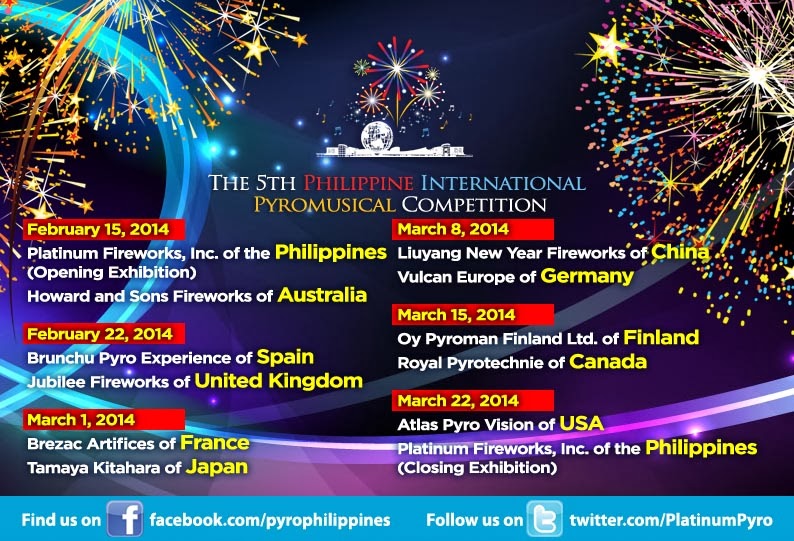