Rode a Bike in Vietnam, With A Scar To Prove

If a picture paints a thousand words, I'm pretty sure this one shows a happy lady on her bike, wearing a smile to mask a grimace. 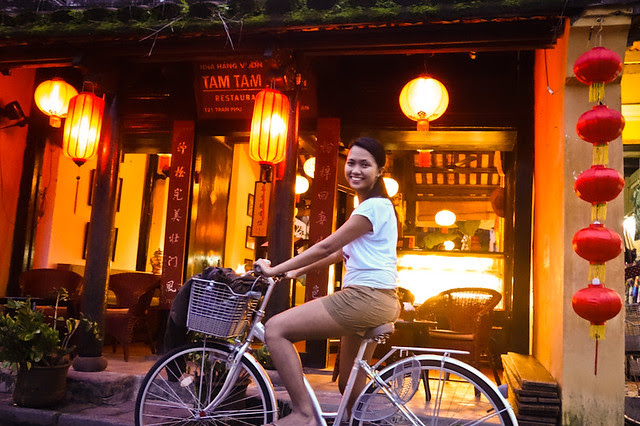 A year and a half ago, I embarked on a challenge to finally learn how to bike at the age of 26. With the help of a friend who patiently taught me and who actually researched how to teach an adult to ride a bike, I was finally able to go around my neighborhood on 2 wheels, even braving the trail at Timberland. I also tried to bike around Manila, crossing Edsa from Magallanes to Makati, and that was probably the only day when I spit so many expletives, all aimed towards jeepney drivers.

I wanted to go for something bigger. The dream that I had in mind was to go biking in a busy place, where no one knows me. I wanted to bike in another country's busy streets. That specific country I pictured in my mind was Vietnam.

Fast forward to November 2012, I finally step foot on the motorcycle-crazy streets of Vietnam.

I did not dare find a bike in the streets of Ho Chi Minh, where the probability of being killed while crossing the street or even just walking on the sidewalk (if there's even one) is rocket high. Then we came to visit the small, ancient town of Hoi An where we emptied our pockets and splurged on great food. Since the town is a Unesco Heritage site, much of the place is protected, and most streets are closed to traffic, except for bicycles. Hoi An looked safe enough to go biking around.

So we declared our second day in Hoi An as Bike Day. We rented out bikes and went around the town early in the morning. It was such a joy biking around and stopping anywhere we wanted, taking photos of the shops that thankfully opened late in the day, and following the locals getting around with their daily lives wearing their conical hats.

The good thing about Hoi An is, there are plenty of places to explore, all a bike ride's distance away. On our way to An Bang beach late in the afternoon, rain suddenly poured. We were already out in the open highway when rain started falling like pellets, and since I am almost always never ready for the rain, I was soaked even before reaching the beach. From being immobile in 2011 to biking in the open highway under the rain a year later, I felt like I have finally reached the pinnacle of my late bloomer biking dreams. I felt invincible.

The wind was cold and it was probably not a good idea to go swimming, and the sky looked like it was going to let another batch of rain out. We decided to make one last stop inside the town of Hoi An before finally calling it a day. I needed to have my photo taken: me on my bike, with the lanterns and shops as background. A photo that screams Biking in Hoi An. 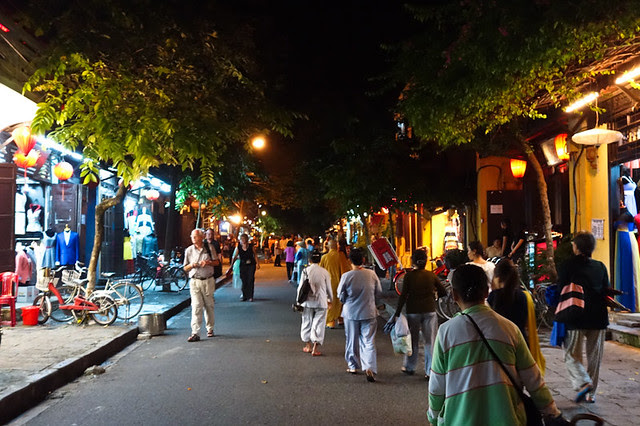 We made our way back to the town, which always got busy with tourists at night. With many people out on the streets, it was quite tricky to maneuver past groups walking like they owned the streets. It was still good though since the streets were closed to vehicles. Feeling like I have earned a new badge in my biking career, I felt confident overtaking tourists walking slowly on the street. As I maneuvered to the left to try to overtake a group of 4 tourists, a motorcycle popped out of nowhere and was suddenly running close on my left side. In between running down a tourist and smashing against a motorcycle, my hand decided to go left, locking handle bars with the motorcycle, and in a split second, I said hello to the gray concrete street.

Imagine my ego crashing down with me. The whole afternoon I was elated with my biking skills, and suddenly, I got into a minor accident.

And just like a kid who does not want to be embarrassed in front of her friends, I quickly stood up, brushed myself clean, took my bag, grabbed my bike, and smiled to let everyone know I was fine. I made a mental note that the motorcycle and the driver crashed down with me (meaning I did not go down without a fight haha). That made me sound so evil but we were not really running at a high speed so the crash did not really harm us, except for the wound on my knee, a few scratches on my leg, and a bruised ego.

After putting some liniment on my wound, we decided to go ahead, take a photo, and go home. I was shaking when I rode the bike again, my legs turned to jelly, and paranoia dawned on me. Someone honked at me because I could not navigate through oncoming traffic for a few minutes.

Finally, we reached the spot.

I put a smile on and tried not to wince for the camera.

Biking in Vietnam will be remembered. And if ever I forget, I just have to look at the scar on my knee and be reminded.