Shakespeare in the Park

The arts were not a huge part of my growing-up years. I stared at paintings without a vague sense of its depth, I saw ballet performances on TV and switched channels, I never tried to scrutinize minute details of sculptures, and the only theater play I thought to watch live was The Sound of Music (only because I loved the movie as a child).

The first play I watched was Nick Joaquin's The Portrait of the Artist as Filipino in college. It was a  small school production that we were required to watch.

Fast forward to 2007, I was able to regularly drop by art exhibits in a mall. The exhibits were fun and refreshing to the inexperienced eye. In 2010, I found myself inside a deserted art museum in Kuala Lumpur. There was not a single soul in sight. I took my time scrutinizing the works.

Maybe those were signs. The arts and I. We stand a chance.


Earlier this year I realized I haven't watched a real professional stage play production. It was about time that I experience one! In May of this year, I finally had a taste of my first ever real play, picnic-in-the-park style. Think Paco Park Presents, the Singapore Repertory Theater Edition. I was lucky to be in Singapore during the running dates of SRT's Shakespeare in the Park: Twelfth Night.

From Orchard Road, we took the GPS out and found our way towards Fort Canning. Fort Canning is  a hill in the middle of the city where Stamford Raffles, the founder of Singapore, lived back in the days. It has been turned into a park and aside from being a quick green escape from the city, it is now a venue to various cultural activities. It took a 20-minute leisurely walk before we found our way inside. 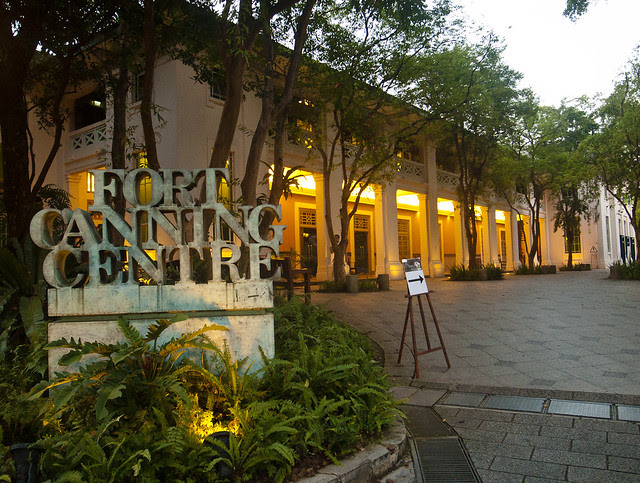 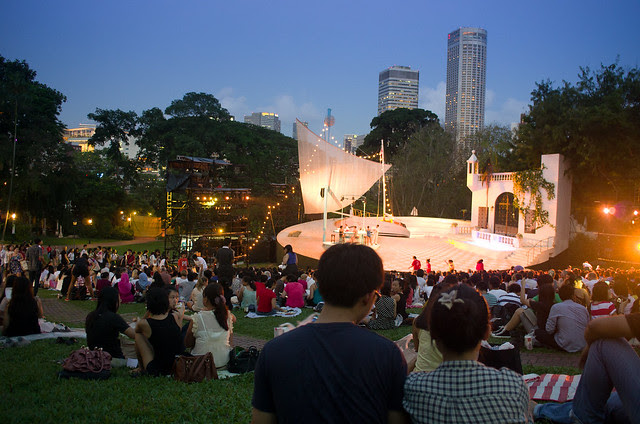 We arrived early but there were already people setting up. Locals and foreigners alike were coming in, armed with their blankets, snacks, and cameras. We found a spot on the top of the hill and sat on the grass. The stage was set below a gently sloping hill, with the hill providing a good vantage point for the audience. I had no clue on what the play was about but thanks to the flyers provided by SRT, I knew the plot and the characters the actors were going to portray before the play started. It also helped that my companion was quite versed with Shakespeare and his works.

By the time the play was about to start, the whole place up to the top of the hill was packed. 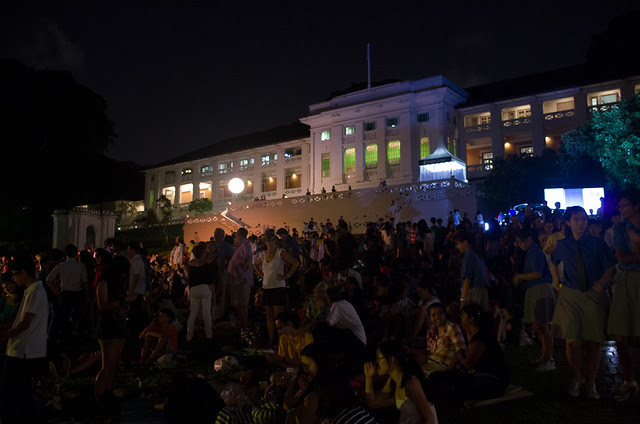 It was a wonderful evening in Singapore, with the lights of the city's buildings coming out to life and blending with the stars in the clear sky. The wind blew softly, enough to relax us and rid everyone of the events of the humid afternoon. The show director went up on stage, announced the start of the play, and the chatter slowly died down. The first act was opened by a captain and his crew drinking by the bar at the bay. 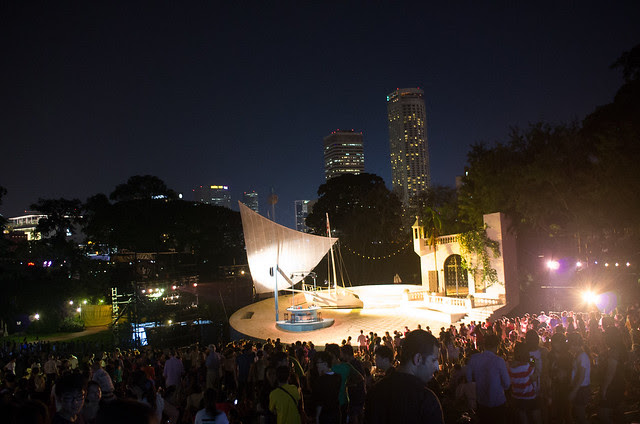 Twelfth Night is a story of an assumed identity that led to a familiar love triangle with an unconventional twist. Viola was a survivor of a shipwreck and she never saw her twin brother, Sebastian, after the incident. She was washed ashore in the land of Illyria. She disguised herself as a man named Cesario and worked for the Duke Orsino who was in love with Olivia. Olivia, who was still grieving over the death of her family, did not want to see any suitor for the next seven years. Orsino asked Cesario to work as a messenger of his love for Olivia. In the end, Viola fell in love with the Duke Orsino who was in love with Olivia who found herself in love with Cesario (who was Viola in real-life). This confusion is where the story revolved.


Before the intermission, we saw Sebastian showing up on the shores of Illyria. Too bad we did not get to finish the next act but here's how the story goes: the twins Sebastian and Viola meet and everything is cleared up. Orsino married Viola and Sebastian married Olivia. And they all lived happily ever after.

After watching Twelfth Night, I realized that theater is an entirely different world that can suck you in completely for the time being. For someone with a short attention span like me, watching a stage play meant focusing and taking it all in. The venue probably was a huge factor, the park made it seem more intense. Watching something on the screen does not require much because it can easily be put on rewind, but watching a stage play demands more attention, missing a word or looking elsewhere can easily sidetrack you from understanding the story.

So maybe.. I'll start to delve into the arts this time. Maybe I can start with watching stage play versions of movies I saw (watch Sound of Music for real). I could start to include catching cultural shows in my next trips, take virtual tours of museums (like this of Louvre for the meantime), and spend more time taking in details of sculptures and architectures... to not be in a rush. To take everything in one at a time.

And maybe... it's not too late for a crash course on Arts Appreciation.

Have you always had an inclination to the arts?