Po from the movie Kung Fu Panda is adorable, but he comes nowhere near the charm of real-life giant pandas.

Meet Le Le and Ying Ying from Ocean Park in Hongkong! These 2 lovable giants are mainstays at the Amazing Asian Animals complex.


Pandas are proof that huge and cute are two words that go together. One look at them and you know you just can't resist that hug-inducing feeling. I could not stop gushing as I felt like a kid running towards these sleeping creatures.

Is there any other animal out there that looks as sweet as these two when sleeping?


According to this site, pandas spend 54.86 % of the day looking for food, 43.06% for rest, and only 2.08% of time for play. All a panda ever does is eat, play, and sleep. When we got to Ocean Park, we saw the pandas doing what they do half of the time.. resting. Sometimes they would stir in their sleep and raise their heads. These mere movements from the two always elicit a collective "Aaaw! That's cute" reaction from the audience.

On the other side of the fence are the red pandas. They are smaller than the giant pandas and though they do not have that I-want-to-cuddle-you-now vibe, they work their charms on people. I think they look like an offspring of a fox and an ewok. But that's just me! 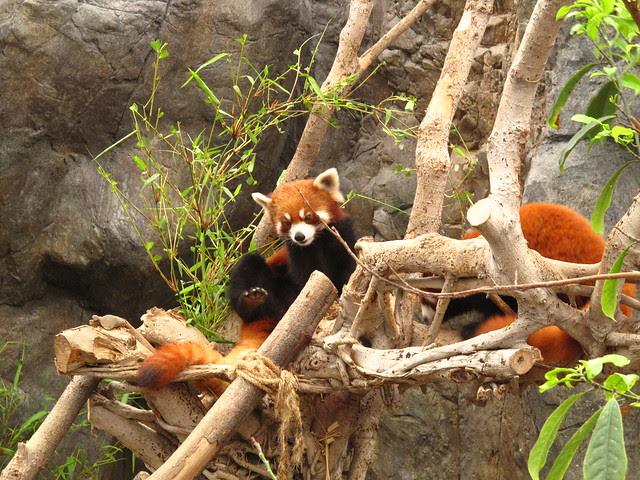 If pandas were not endangered species, I would keep a backyard full bamboos so I could take one home with me. Or maybe I could get a place huge enough to keep two. Polar bears and tigers work their magic on me too, but I don't think I would want them in my backyard. ;)

What's the most adorable creature you've ever seen?