Back from our morning trek to Tappiyah Falls. We came home to Mang Ramon's Homestay, with our lunch of steaming brown rice and crispy porkchop waiting for us.
The day's second agenda: visit Cambulo. A village located north of Batad, reachable by 3-4 hours of trekking on rice paddies and terraces. I didn't know a thing about Cambulo but Dandy mentioned guiding a group to the village the previous week. So we said, "Sige kami rin!", gaya-gaya mode ON. He said there's no electricity in Cambulo so there will be no meat for our meals. Patay. I can't live without meat.. yet. So I asked Irene to fry me some porkchop for my baon.
Thankfully, the sun was not shining so harshly when we left Batad.  We listened to Dandy's tales of the trail but most of the time we walked quietly (or hummed a tune) and let ourselves be engulfed by the serenity brought by all the shades of green. 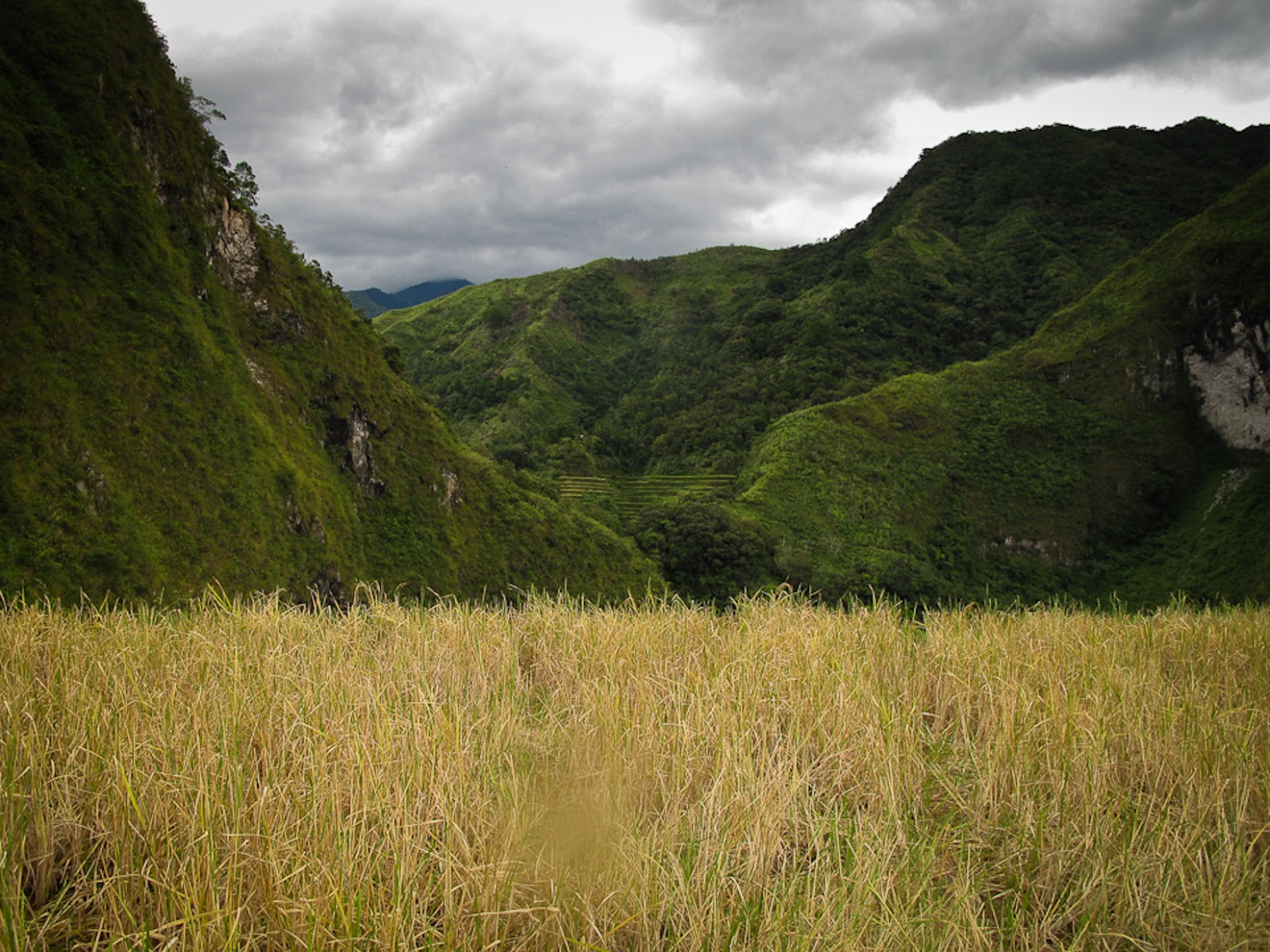 Trekking along the landslide ruins 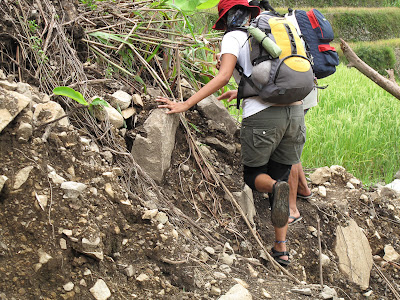 It drizzled halfway through the trek and we were drenched again on our second day. On our way, we ran into a man with a rifle, with a kid trailing him for a sidekick. Tall, dark, toned, and and yes he was a handsome Ifugao, with a rifle slung on his shoulders, wearing a brown vest. I muttered, "Wow, action star!" I swear he looked like one! May kasamang sidekick pa kasi. 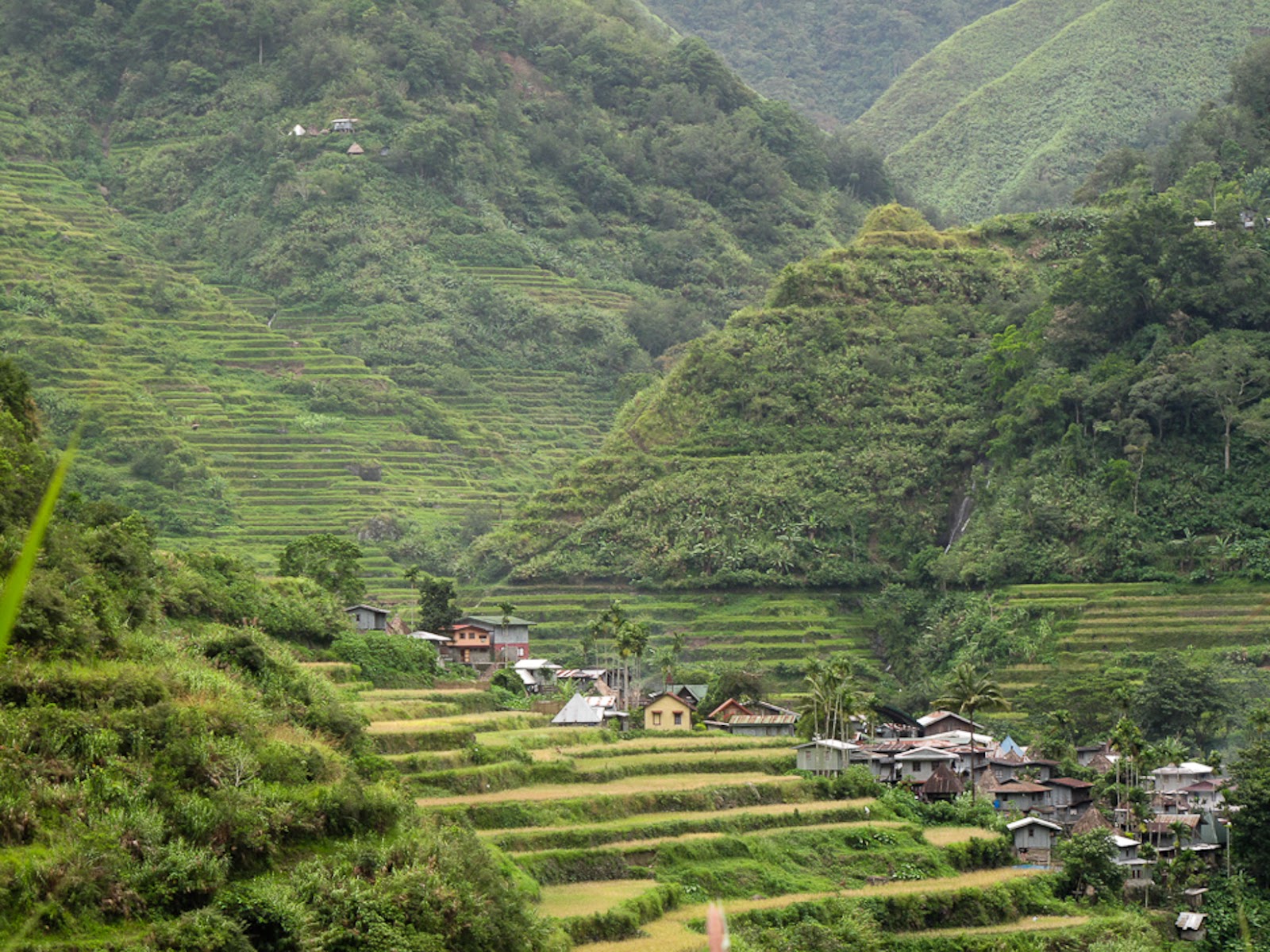 It was almost 5PM when we reached the village. We rested at Cambulo Inn, took a hot bath, and asked them to cook chopsuey for us(with porkchop bits). We met another drenched traveler, Mark from Denmark, who trekked for 7 hours from Pula (without a guide!), another village in Banaue. We marveled at his skills in navigating the trails. It was a good thing he didn't get lost. Well, he said he did get lost, but he found his way back.
The solar-powered lights eventually flickered out. It was raining the past few days and the solar batteries had ran out of charge. What to do with the lights out at 6PM? Do socials.. the Cambulo way!
We went back to the table as the kids started to fill the dining area. The entertainment of the night: song and dance numbers courtesy of the kids of Cambulo! 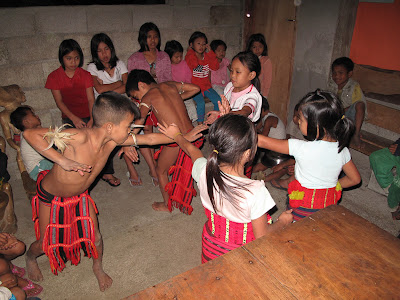 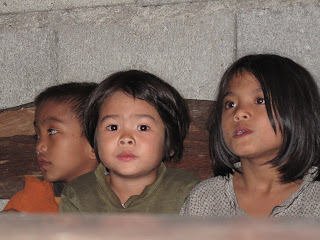 We gave out chips for the kids - feeling ko birthday ko 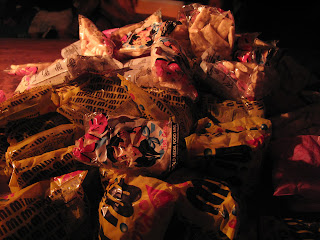 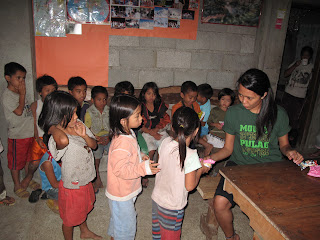 It was great that we took someone's advice from the web and brought matchboxes with us.  We gave it out to the villagers, including the action star. By the way, the action star laid flat on his belly on a wooden bench, with a lady kneading his back. Classic!
They were teasing us to sing a song for them. If they were a bit more persistent I would have gladly sang one for them, good thing they weren't! Haha! I think they knew we were telling the truth when the 3 of us said we can't sing. We took a photo with the kids instead.
Mark, Aaron, Me, and Dandy - all burnt from the day's trek 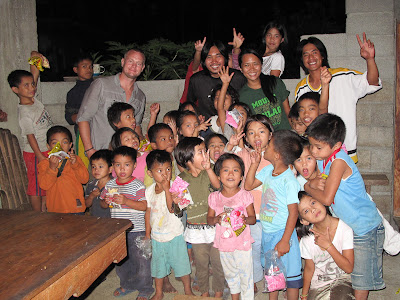 By the time we finished with our socials, somebody told us that the fireflies were out already. We went out at the back, and there they were. Wonders like these can really shut me up in awe. I stood there fascinated by the blinking, flying lights. It was Christmas in August! 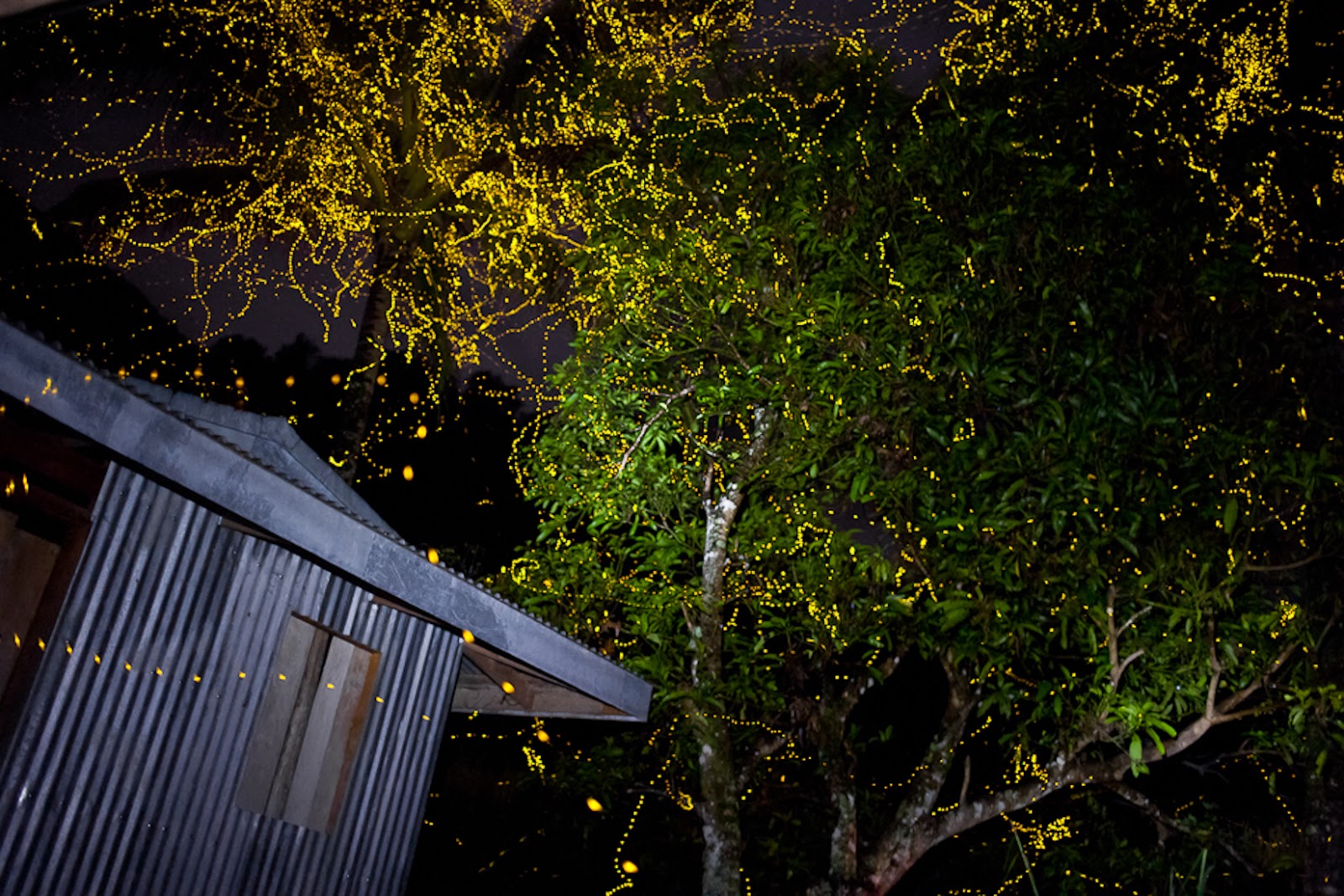 The fireflies are right outside our room's window. This was the view that put me to sleep. Plus Cynthia Alexander playing softly on the iPod speakers. 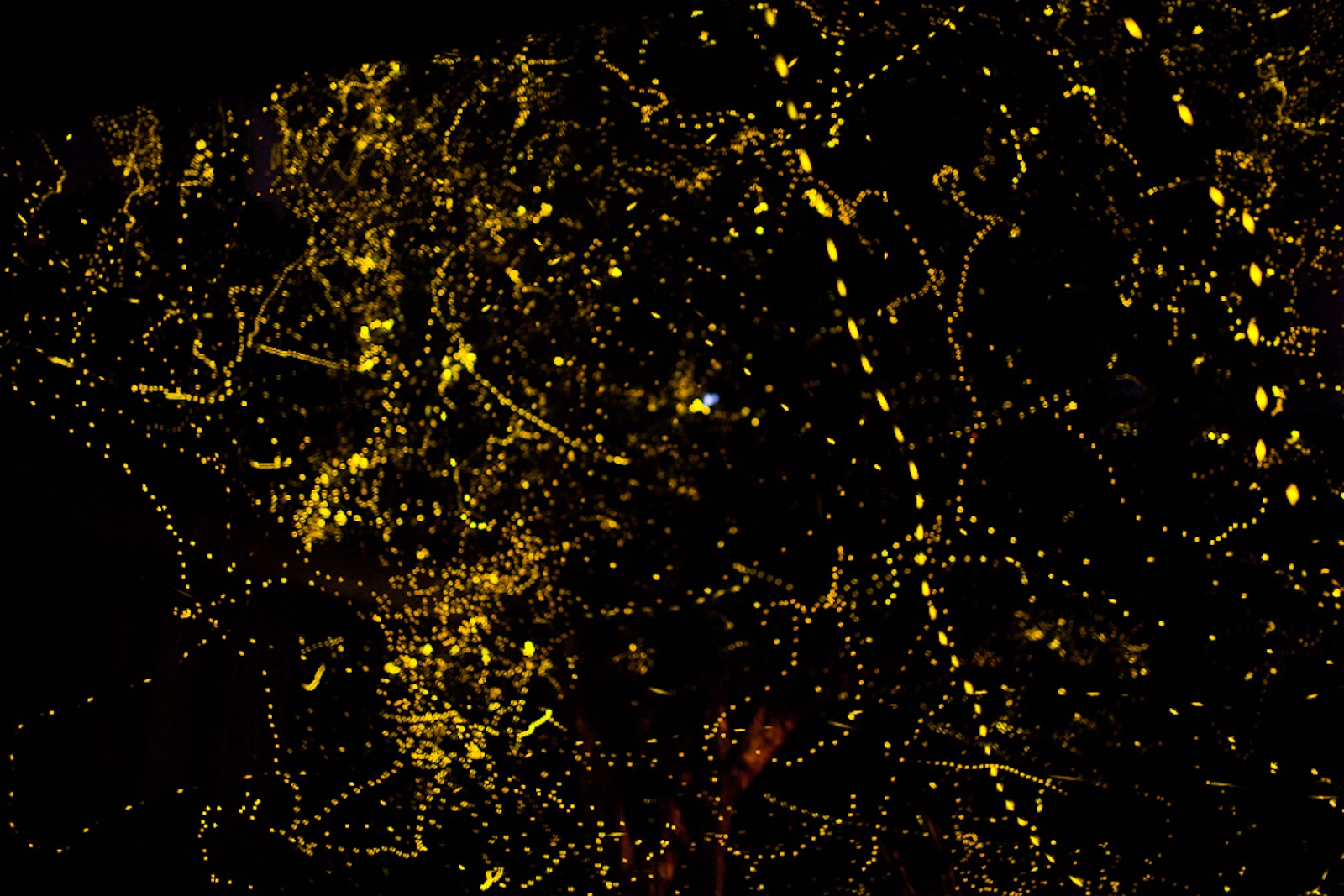 The next day, we woke up to a cold morning, later on eased by the warmth of hot banana pancakes and a fresh cup of coffee for breakfast.  We said goodbye to Mark, who went on his way to Batad, took one last walk around Cambulo, and said goodbye to the friendly villagers. We slowly made our way back to Banaue.
Last look at the terraces 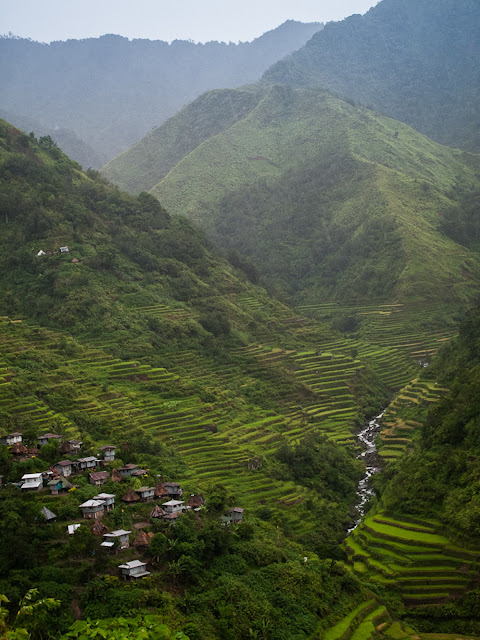 The trek back home was longer than usual because of the landslides brought by Typhoon Mina. The roads were blocked with boulders and no vehicle could pass through.  It took almost 7 hours of walking to get back to Banaue.
Road blocks ahead 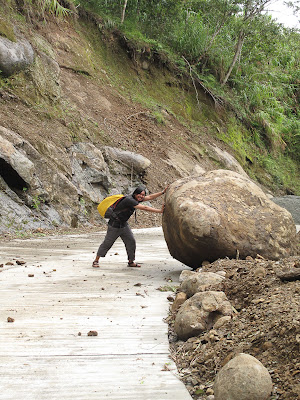 We got back to Banaue, exhausted, muddy, and hungry. The perfect stop for people like us? People's Lodge! They offered the use of their shower for a minimal fee.  They prepared our food while we scrubbed ourselves clean. It was still a few hours before our ETD so we spent the rest of the day walking around the town.


Feel fine when you dine! 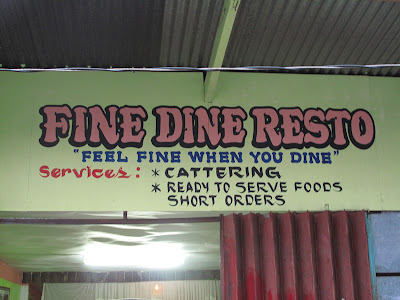 And in one of the restaurants, we found them! The friends we made on our first day at Batad. They left a day early to visit Sagada but had to come back because the Sagada-Baguio road was impassable. 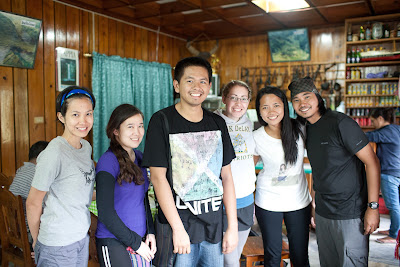 We all took the same bus back to Manila. I slept throughout the 9-hr ride, and when I woke up, I was back in the crowded city I call home.
Photos by Aaron Manila, except of course, the ones he's in. :)
Call Ohayami Transit for your bus reservations. Manila-Banaue tickets cost P450 as of August 2011. Contact Number: (632) 516.05.01
When in Banaue, contact Dandy Umhao, our knowledgeable and accommodating guide.
Contact Number: 0910.346.5310


This is Day 3 of a long weekend trip to Banaue:
Day 1: The Road to Batad
Day 2: Tappiyah Falls
Going Local at Ramon's Homestay