Early Friday morning, we headed off to Victorias City, an hour north of Bacolod City. Andrew agreed to meet us up and bring us to the Church of the Angry Christ, including a side trip to their demo farm.  Apparently, the 'demo' farm is a 3000-sqm swampy land that now produces herbs, crops, and vegetables, and where groups of swine, chicken, duck, and rabbit are raised organically.

The land, owned by Andrew's family, was originally a bus repair shop. The family used to grow water spinach (aka kangkong) at the backyard to provide food for the shop workers. When the kangkong grew out of hand, the family decided to get a swine.. to finish some more of the wildly growing leafy vegetable. And that was where it all started. From then on the business grew and the farm is now supplying products at the Organic Section in SM City Bacolod.

The family holds seminars in the farm for people who want to learn how they could start earning from their own backyards. Just a day before we went, delegates from Vigan led by their mayor, Eva Medina, visited the demo farm.  As the name implies, people can get a feel of which animal they want to raise or which crop they want to plant in their backyards. As for the funds, Andrew mentioned that the local government provides the start-up capital for the people who were interested. The family also sells piglets to the locals, teaches them and assists them in raising the animals, and when the time comes, buys the hogs back from them.  Talk about sustainable profit for everyone.

In the midst of the farm is a gazebo which Andrew designed and built when he was still in college. Andrew, who was designing and building when he was still in high school, is now an ingenious architect.  He has found good use for glass windows from old buses, beer and soda bottles, logs of  trees cut off from their backyard, and bus tire interiors.

Right in the midst of the piggery is Cafe Organico, where one can dine without the usual stinking smell. 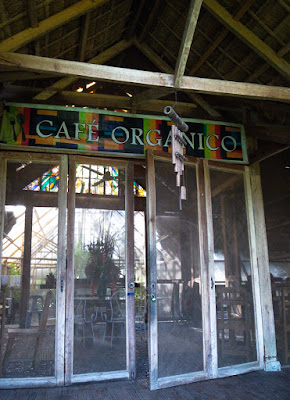 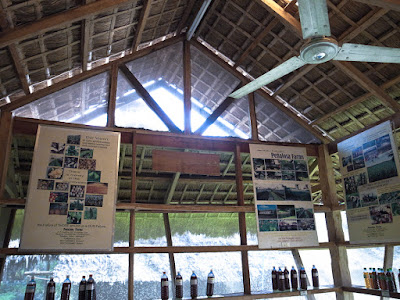 The family's advocacy is to educate people that there is money in the countryside and no Filipino should be hungry in his native land.  In a time when everyone wants to take a bite of the city, this is a reminder that this kind of social entrepreneurship is what we need to make the best of our lands, to provide for families without having to leave them, and to profit while helping others make their own living.